Bethany McCarthy renamed our statue out front, which was created in honor of her father, longtime Northview Hockey Coach Jim Cooper, the Coop-brrrr Cat, yesterday.  True, it was too icy for the Wildcats to make the trek to school. We are back in action today, as our students are working hard in the classroom and beyond, achieving all that they can with what is left of this third quarter and winter season.

Sophomore Emma Steingass raced to a second place finish at the indoor track meet at the Ohio State University last weekend. If you look out your window, it may not seem like it, but spring is right around the corner. Soon, we will get a chance to see Emma and her teammates running through the warm, spring air.

The Northview Hockey Team has quietly put together a solid season, with wins over some big programs. Below, you can see them putting in the work during a practice session…

They had the opportunity to play outdoors in Michigan this season…

This past weekend, they lost a nailbiter against SJJ, and are hoping to have a chance to settle the score in the playoffs.

Senior Night gave us a chance to honor a class that is helping to put Northview hockey back on the map….

Patrick Andres was named the Sylvania Chamber of Commerce Student of the Month.  Ms. Huey had this to say about Patrick, “Patrick Andres is one of those rare students a teacher will never forget, and for all the best reasons. He is a talented and humble sports writer, a highly motivated student, and an incredibly respectful person.  In the time he has been on the newspaper staff he has attended two different sports writing conferences for high school journalists. The first was two summers ago at the Carolina Sports Journalism Workshop where he had the rare honor of having his work peer-reviewed twice. The second was this past summer when he attended the Michigan
Interscholastic Press Association summer workshop for high school journalists where
he participated in a press conference with professional basketball player Desmond
Ferguson. Patrick asked a question that not only showed he knows sports, and boy
does Patrick know sports, but that he knew about Ferguson’s basketball history
including his college years. Ferguson literally looked shocked at the quality of Patrick’s
question and his breadth of knowledge. None of this came as a surprise to myself or the
Co-Editors who were there, we have seen how well versed Patrick is in sports.
When we started training the newspaper staff this year Patrick asked if he could create
a presentation on how to write sports stories. I have never in my 20 years of teaching
seen a student create a better presentation, and he made it in one night! He not only hit
on all the major topics I would want, and some I had not even thought of, but he was
witty and related to the students through humor, video clips from Friends, and a stats
writing game.”  Congratulations, Patrick!

Speaking of Students of the Month honors, Senior Hayden Bolden was selected by BCSN as their Scholar Spotlight for February.  You can see the clip that is running on BCSN here.

At a recent meeting, the NV Drama Club hosted a special guest, Mary Boyer, a local actress with a recurring role on the Netflix series Orange is the New Black.

The Girls Basketball Team has put together a rock-solid season, which continued on the road at Springfield a couple weeks ago…

Their winning ways continued on Senior Night, when the LadyKats, led by these three hardworking, competitive seniors, defeated the Bowling Green Bobcats.

Ms. Davis and Mr. Sayre’s students competed locally to see who could earn spots in the Business Professionals of American state-level contest.  Congratulations to the following qualifiers…

Mrs. Cafferty’s Medical Technology Juniors are learning CPR in class, and are using new dummies that are equipped with a sensor, alerting the student when the amount of pressure they are applying is correct.  AJ’s green lights mean he is in good shape.

The Speech and Debate Team is proud of its State Qualifiers:

Northview Wrestling is another group that continues to build momentum.  These seniors have contributed significantly to that process.  Kudos, gentlemen.

Ms. Janecko’s freshmen scientists are learning about Radioactive decay, and were using (and later eating) Skittles to help illustrate how long a matter’s half-life is.

The Boys Basketball Team is still ranked in the top ten in the state of Ohio, and is still undefeated, with a huge home game coming up this Friday against Anthony Wayne.  A home win this Friday, which is also Senior Night, will lock up the NLL Championship for the Wildcats.  The North (student section) will be taking over the lower bowl for a tie-dye Fill It Up, as they are hoping to create a great atmosphere for the Cats.  Over the past few weeks, there have been some neat moments for the Cats.  First, Alek West scored his 1,000th point on the road at Springfield…

He was properly honored the next night at home, as the Cats took on and defeated Bedford handily.

The Cats then returned home to defeat the Perrysburg Yellow Jackets for the second time this year, thanks to some clutch defensive plays down the stretch by Sam Clear and Billy Biggs…

If you have traveled to Napoleon to see a basketball game, you know that it is a tough place to win on the road.  The Wildcats had no problem bringing home a big victory…

…and Senior Billy Biggs played so well there, he was named the BCSN Player of the Week!

The North, our student section, continues to build a sense of pride and community in our student body, organizing efforts here and there that give our kids a chance to come together.  They have helped bring home the BCSN Student Section of the Week a couple times this winter season (first time here).  The most recent was when they joined forces with Southview to support an SV Cougar who is battling cancer.  You can see glimpses of their Sylvania Cares campaign here. 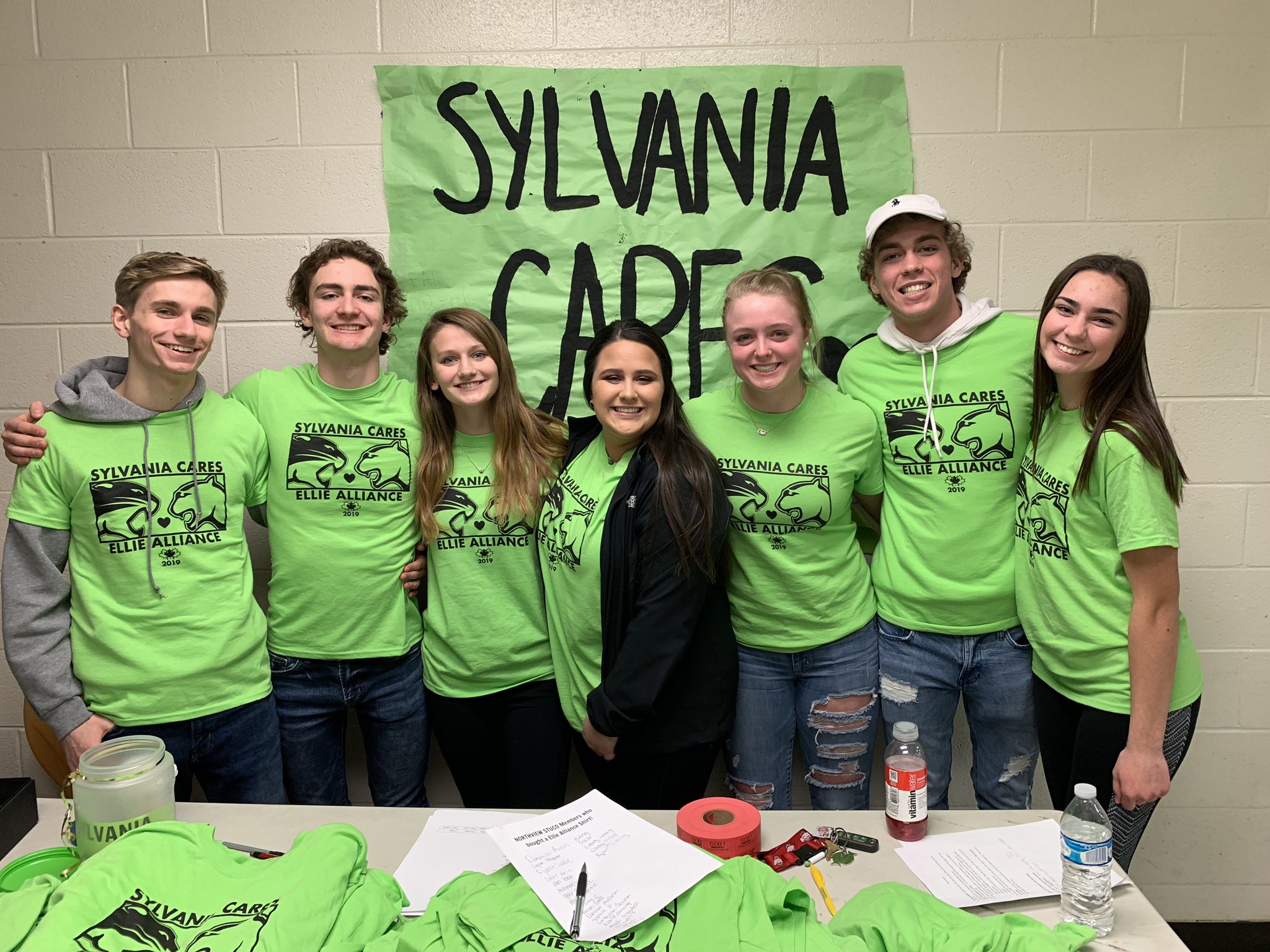 All of their combined efforts, stretching back to the fall season has earned them a finalist spot for the Ohio High School Athletic Association Student Section of the Year.  Check out Commissioner Snodgrass’s announcement here.  They have been invited down to the Columbus to be honored at halftime of one of the boys’ basketball state final four games, where they will find out if they won best student section in Ohio.

Northview had several students who were selected to be a part of the All-State Choir and Orchestra.  Junior Chyenne Smith joined Mr. Davis in Cleveland for the choral performance…

…while Sara Lee, Danny Lee, and Samuel Kim were selected to be a part of the All-State Orchestra.

Members of the Earth Club met recently with Food Services Director, Joe Shamy, sharing ideas with him on how they believe we can be more earth-friendly with how we operate in the Northview cafeteria.

The 2018-19 Winter One Acts took place a couple weeks ago, and gave students an opportunity to address the stark topics of school violence and bullying.  Kudos to these young people for tackling the tough issues.

Our fledgling Mock Trial Team participated in only their second district tournament and came away with some positive results from a young crew.  They defeated Maumee Valley Day School in their first round.  Maiya Black won Star Lawyer, and Eddie Garcia earned a Star Witness Award.  They researched and acted out a case from the OCLRE: State of Buckeye v. Quinn Woolf.  It challenged students to consider an individual’s right to privacy in our increasingly technological world.  In September of 2018, Quinn Woolf was arrested on charges of aggravated assault and telecommunications fraud for stealing $120 million from the State of Buckeye’s pension fund.  The state alleged that Quinn used a private, alpha-numeric code to hack into the state’s digital wallet and drain the funds. The state based its claim on drone footage captured from 400 feet in the air. The footage was enhanced to show Quinn Woolf sitting under a gazebo in the backyard of the Woolf residence with a notebook and a laptop. The enhancement revealed an alpha-numeric code written in Quinn’s notebook that matched the code needed to access the state’s account. The defense filed a motion to exclude the drone footage, claiming that police violated Quinn’s Fourth Amendment protection against unlawful search and seizure. The motion hearing focused on the need for a search warrant; specifically, if the contracted drone operator qualified as a state actor and if Quinn had a reasonable expectation of privacy.  The experience, as you can image, was a fantastic one for our students.  Thank you to our volunteer coaches, John Schlagater and Lucinda Weller, and of course, head coach Elizabeth Rauscher!

The Glamour Gals Club is rolling again this year, reaching out to our elderly neighbors who live in